July 23, 1964 Ginger and Lela Rogers visited to their hometown of Independence, Missouri for the first "Ginger Rogers Day" celebration along with President Harry S. Truman at his office at the Truman Library.

From Ginger's book GINGER: My Story:

"After  finishing Magnificent Doll, I was invited to the White House [in 1946]  to see the actual portrait of Dolley Madison and I happily accepted. 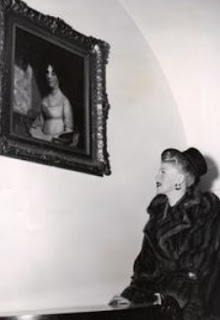 While  I was viewing the portrait, someone asked if I wanted to meet President  Harry S. Truman. "Yes, I would," I said. "We are both from the same  state."

Inquiries  were made, and in a short while I was ushered into the President's  office. He was busily working on some papers, which he took a moment to  finish, and then looked up and said, "Now I'm ready to meet the young  lady."

"Mr.  President," I said in a teasing tone, "you and I are from the same city  in Missouri, and I am here to register a complaint. No one realizes I'm  from Independence and everyone knows you are. I'm Jealous."

"Yes. I'm proud to be from Missouri and Independence."

With a twinkle in his eye, our thirty-third President said, "Well, we'll have to do something about that."

Almost twenty years later, on July 23, 1964, something was done; Independence, Missouri had a "Ginger Rogers Day." Mother and my  good friend, Shirley Eder, a journalist from Detroit, joined me for the  festivities. On the grandstand with me was former President Harry S.  Truman. After the ceremony, Mr. Truman and I were given shovels to break  ground in Independence for a new electrical system. Then he invited us  to tour the Truman Library, where we spent three wonderful hours with  the former President as our guide.

Before  we left, he tried to reach Bess, but she had spent the afternoon at her  favorite sport - fishing. So Harry Truman has his library in  Independence, and I had my "Ginger Rogers Day." That seems fair enough!"